Straight after my arrival in Europe, I told my friend Pau (a Barcelona bred manchild of 24) I wanted a cocktail, and he gave me two options.

“Ok Audrey, we can go to a fancy cocktail bar called Solange in a nicer part of the city centre, where a lot of fancy people dressed in nice clothes hang out.”

“Or we can go to a place that is located in what used to be a dangerous part of the city, and it’s where you might take a hooker. It’s still nice, but there’s a table that looks like it was picked up from the street. The place is filled with red lights. What will it be?”

Pau has a black sense of humor, so I knew he was joking about the hookers. Still, I was pretty raggedy from 24 hours of airports and airplanes, so I went with the red light cocktail bar.

Negroni is located in a little street in the barrio La Raval. It’s a small, simple looking cocktail spot that could hold maybe 30 people at the most. The bar is built of plexiglass and has cute cartoons drawn onto the glass. The same style of cartoons adorns the doors to the bathroom stalls, which are a bit eerie with red lights. Red and black paint cover the walls.

The bar’s signature drink is The Negroni, which is 1/3 gin, 1/3 vermouth, and 1/3 campari. Against one of the walls hangs a campari sign, along with a tasteful light fixture made from tiny campari glass bottles. 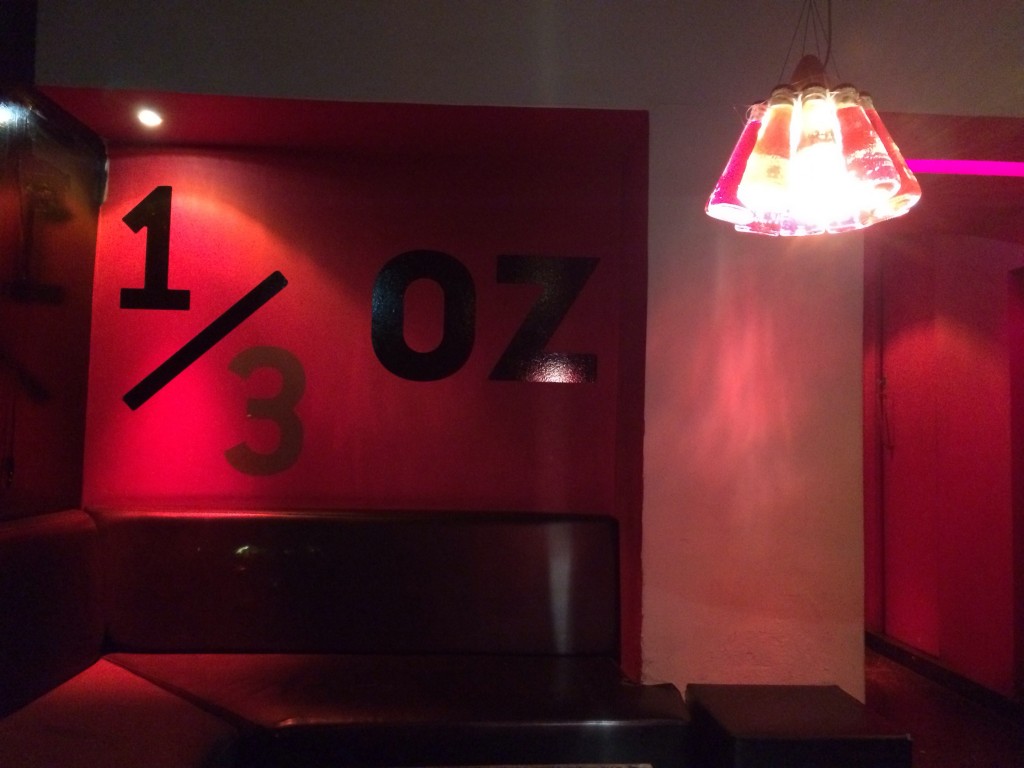 The place has two bartenders, and both are extremely knowledgeable. When you enter Negroni, there isn’t an obvious cocktail menu to choose from. Instead, you are encouraged to tell the bartender what kind of drinks you like. In return, he asks you about your preferences in flavor. It’s conversation that makes for the perfect concoction suited to your tastes and mood.

I told the bartender I like sour drinks and whiskey, and he put some passionfruit, lemon slices, and soda into the mix to make it a long, fresh drink. (He spoke English well enough to tell me what ingredients he would add.) It was refreshing and so tasteless of whiskey that it could’ve been a healthy fruit drink. And there was froth on top. Magical!

For the second one, I wanted something with heat that could potentially soothe my icky airplane throat. The bartender suggested ginger beer and lemon mixed with whiskey. The result was a cocktail so warm that it burned my throat with ginger spices. The red glow from the single source of light in the room added to the warming effect.

At 8-10 euros a cocktail, these weren’t the cheapest drinks I had in my week in Barcelona. Most bars were in the 5-7 euro range. But Negroni’s drinks were the most gastronomically pleasing, so pleasing that I had to spent my last night at the little bar in La Raval.

It was Pau’s idea. We had just come from Casa Almirall, a pub built in 1860, and there was time for one more stop before I had to grab my things for my 6 a.m. plane ride to Ibiza. We decided early on that I would just pull an all nighter for the sake of a last night in Barcelona. “Why don’t we do Negroni again?” “Sure.”

The same bartender was there, and he remembered us. (Pau frequents Negroni a lot so it wasn’t a big deal for him, but I rather enjoyed my newfound client status.) Instead of the handshake I had given the bartender on the first night, I greeted him with the Spanish cheek kisses that I learned to do over the week. We told him what kind of flavors we were looking for – something minty and fresh for me, a short old-fashioned for Pau – and settled into the black leather couch to engage in one last conversation about music, books, cocktails, and travels.

Sitting with my feet up on the table that Pau said could have been picked up from the street, sipping on a sour drink with mint leaves, I had the warmest realization that my week in Barcelona had come full circle.

Negroni is a fine establishment with simple decor that keeps its focus on making quality drinks based on quality conversation between the bartender and the customer. It’s a beautiful, simple cocktail spot that embodies the culinary experience of Barcelona as a whole: a place where the ingredients are fresh, the goods are made to order, and lively conversation flows freely, all in an unpretentious setting.

For more info on Negroni, go to http://www.negronicocktailbar.com.