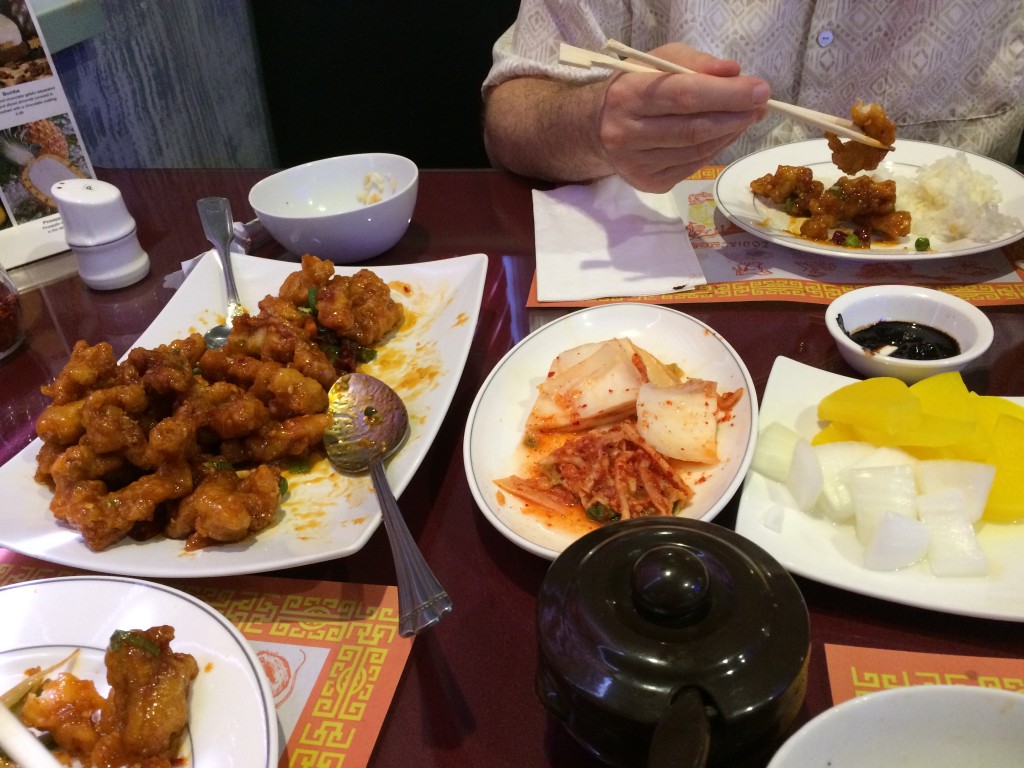 A friend of mine once told me that every family has their favorite Chinese restaurant, and rarely are they the same as another family’s. It’s just one of those things that people remain loyal to for life. My family’s automatic no fuss go to Chinese place will always be Hop Li in Downtown LA. It’s got killer Mongolian beef, three meat chow fun, and the best sizzling rice soup I’ve ever tasted. We bring people here whenever we are passing through LA, and the spot never disappoints. They’ve had the same waiters (and the same red tablecloths) for years and the place feels like home.

But change is good, and it’s not a bad idea to try a new Chinese place once in awhile, just to keep the palate fresh. We were in Fullerton visiting Grandma and decided to give Mandarin Palace, a fusion Korean-Chinese restaurant, a spin. Tucked in a strip mall, it doesn’t appear all too fancy from the outside. But inside is a gorgeous glowing blue oasis with plants and smart red counters.

Mandarin Palace is Korean-owned and operated, so they serve cabbage kimchee and daikon and provide K-specialities like jja jang myung noodles and jjam bbong chicken. Jja jang myung consists of handmade noodles slathered with black bean sauce, diced onions, and diced beef. Jjam bbong is fried chicken pieces covered with a tangy sauce. It’s similar to orange chicken but tastier. The breading was real light at Mandarin Palace and made the chicken nice and crispy.

Overall the food was fresh and the meat was lean, lacking in fat globules found on bad Chinese food. The sauces weren’t too heavy either. I appreciated the four-page menu. Oftentimes Chinese restaurants sport these giant volumes with 200+ things to order, and it gets overwhelming to choose. Page one featured the standard lunch special around $10 with rice, soup, and salad included.

What I really liked about Mandarin Palace, though, was the cleanliness! I’ve got a habit of eating at questionably sanitary restaurants in the name of searching for authentic food, and this restaurant was a nice divergence away from that. The floor was spotless and trendy modern light fixtures in the bathroom and throughout the space gave it a zenned out vibe. Based on its tidy looks, Mandarin Palace probably wouldn’t be a place that would give you food poisoning, a nice retreat from less-than-scrupulously-clean Asian establishments.

Eat here for a fresh fusion Chinese meal in a clean and well-designed space.

For more info, go to mandarinpalaceoc.com/.